The Galaxy M54 5G is expected to launch in the coming months and we now have our first look at its design thanks to a new set of renders. The upcoming budget device will sport a redesigned look compared to its predecessor with a punch hole display and a vertically stacked triple camera setup on its back. The phone will be available in at least two color options. 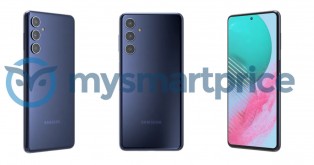 The only previous bit of specs info we have on the M54 is a Geekbench run which revealed the device will debut with Samsung’s in-house Exynos 1380 chipset. The phone will bring 6/8GB RAM and will boot Android 13, presumably with One UI 5.